For the singer or performer using playbacks or backing tracks, Gig Control provides a serious step up from an MP3 player or from iTunes, Windows Media Player or a DAW :

For more complex set-ups with multiple parallel tracks, midi control, timed operations, lighting control then our Pro version has all you need.

What is a Song?

A Song is typically based upon one or more audio and/or midi files. Files may play in parallel (for example to play a set of stem mixes – Drums, Bass, Keyboards etc), and may also play in series (for multi-part songs).

Within each song one file or collection of parallel files may have loops (repeating sections).

A Song is a collection of Actions - audio/midi file play is just one type of Action. Other Actions types include:

Actions may be collected into Groups – not just to keep things organised on the screen but also because actions in a Group can be triggered at the same time, or relative to each other.

Each Group or Action has a defined ‘Fire on’ event and a time relative to that event:

The timeline of an example Song is shown below with a looped intro (to introduce the band) and a guitar solo. The events marked with blue arrows may be triggered automatically and be timed to the millisecond to occur at the right time during the playback and taking into account the looped intro section.

A Song may employ any number of Manual Triggers, typically to start the song and to release loops but they may also be used to trigger other events (by midi) such as smoke machines, lighting changes, patch changes etc, or to start additional sound files.

For each audio file to be played, one or more output devices can be defined, along with Level and Pan values. For midi files only one device is permitted.

When a Song is playing it may be Paused and Resumed, you may jump forwards and backwards within the Song, and an 'Instant Loop' can be triggered (say to extend a solo or to profit from some audience participation).

What is a Set?

A Set is a collection of Songs to be played in a defined sequence. Any number of Songs can be included, and Songs may appear more than once in a set if desired.

A Song in a Set may be identified as ‘Auto Start’ in which case it will be started as soon as all Actions in the preceding Song have been completed. A whole chain of ‘Auto Start' Songs may be defined if desired.

Each entry in the set list has an ‘On’ flag and those Songs not marked ‘On’ will be ignored when playing the Set.

The total duration of the Set is calculated and displayed along with the number of Songs in the Set. When Set Play mode is initiated there is also a running display of the estimated end time of the set (based on the currently selected Song) – very useful when the show has to stop at a defined time.

What is the Looper Module?

The Looper module integrated into Gig Control may be considered to be a sophisticated equivalent to a looper pedal. The Looper allows you to record audio from an audio input and have it played back perpetually in a Loop. Further Tracks may be then be recorded alongside the first ‘master’ Track and then each Track may be enabled for playback or disabled at will so as to spontaneously create a song.

The Looper module in Gig Control has the following key features:

What is a Trigger?

A Trigger associates an external input (Key press or midi message receipt) with one of a series of internal events or actions within Gig Control. Thus a Trigger consists of two elements – the event firing the Trigger, and the resulting action.

Trigger events may be one of:

Trigger result may be one of:

When Gig Control is first installed, a standard set of key press events is defined for each of the Gig Control Events. The same Trigger event may be used multiple times (to initiate multiple results) and multiple events may initiate the same result. Each Trigger also has a ‘Play’ flag which if set means that they will only be active in Song Play or Set Play mode.

Each Trigger event also has a Bounce value defined which is one of:

Triggers may be collected into Groups – not just to keep things organised on the screen but also because the Group may easily be disabled or enabled.

What is a Procedure?

For those with a computer programming background the concept of a procedure or subroutine may be familiar - it is a piece of code which may be called to execute a specific function, and may take as it's input a set of parameters. Within the code you may define variables to hold information.

If this seems like Chinese to you then let’s take an example to illustrate the principle:

Say you wish to receive a midi message from a keyboard and if the note pressed is lower than middle C then you would like to send a midi message to your reverb unit to add a delay (patch 23) and if it is above C to remove the delay (patch 41). So to do this we define a Trigger to receive a Note On message from the keyboard, and then the note selected needs to be examined and one of three actions taken . . .

To do this we define a Procedure, let’s call it KbToReverb. We must then write some instructions as to what will happen when the note is pressed. This can look like this:

These instructions need to be supplied with the note pressed on the midi keyboard, note_number in the code, and this is called a Parameter to the Procedure. This is set up when we create the Procedure.

All that remains then is to complete the definition of the Trigger to accept the midi input, and pass the note number to the Procedure.

Now any message received from the midi keyboard, on any midi channel, and which is of type Note On will result in the code we have defined above to be executed. If we would like to restrict the Trigger to a specific midi channel then we simply change the definition of the Trigger to fire only on a specific channel number (instead of the catch-all chan). If we reconfigure our reverb box to use a different channel we change the assignment of 3 to revchan in the code to the new channel number.

Please refer to the User Manual to explore further.

Four licence levels of Gig Control are available with differing levels of features:

DEMO Demo or 'try before you buy' version. All functionality is enabled but with a limit to the number of Songs which can be saved and loaded (five). If you register your details you will be issued with a licence key and it will start normally. If you do not register then you will be prompted to provide your key each time Gig Control starts.

STD Standard version. Includes all functionality except for Procedures and the Looper module. Procedures give you the ability to program sets of events which are initiated by incoming Triggers, from common events such as Song start, or from the Actions within Songs. Very useful for midi translation and for exchanges with midi equipment such as a mixing desk or an FX unit. The Looper module provides the functions of a sophisticated 8-track Looper Pedal.

PRO Full functionality. This licence is intended for single users only. You may install and run Gig Control on any of your own computers but we ask, in the event that the software is installed elsewhere (such as at a concert veneue), that you uninstall afterwards.

PRO + Professional version. As for the PRO version but intended for organisations, companies or groups where there will be multiple users of Gig Control (for example a company providing live sound). This is effectively a bundle of three PRO licences but as a bonus you may have as many installations and users as you wish.

The table below shows the key features and their availability in each licence level:

unlimited within one organisation

Gig Control has been verifed to be compatible with each major version of Windows from Vista onwards, and on a range of PCs dating from 15 years ago up to the very latest. It is available in both 32 and 64 bit versions - the 32bit version will install and run perfectly on a 64bit computer but the 64bit version will not run on a 32bit machine.

As a minimum the PC will clearly need to be equipped with an audio interface. The default audio device installed on (almost) all PCs will function perfectly well although the sound quality is unlikely to be wholly satisfactory and some sort of additional audio interface (internal or external) is recommended, and for multi-channel work preferably one which comes with an ASIO driver.

If you have a need for midi input or output you will clearly also need a midi interface. With many audio interfaces there is already midi I/O.

Gig Control is delivered as a self-extracting .exe file. No explicit Windows Registry entries are made during the installation and it may just as easily be installed on a USB key without performance restrictions (although startup will be slightly slower). 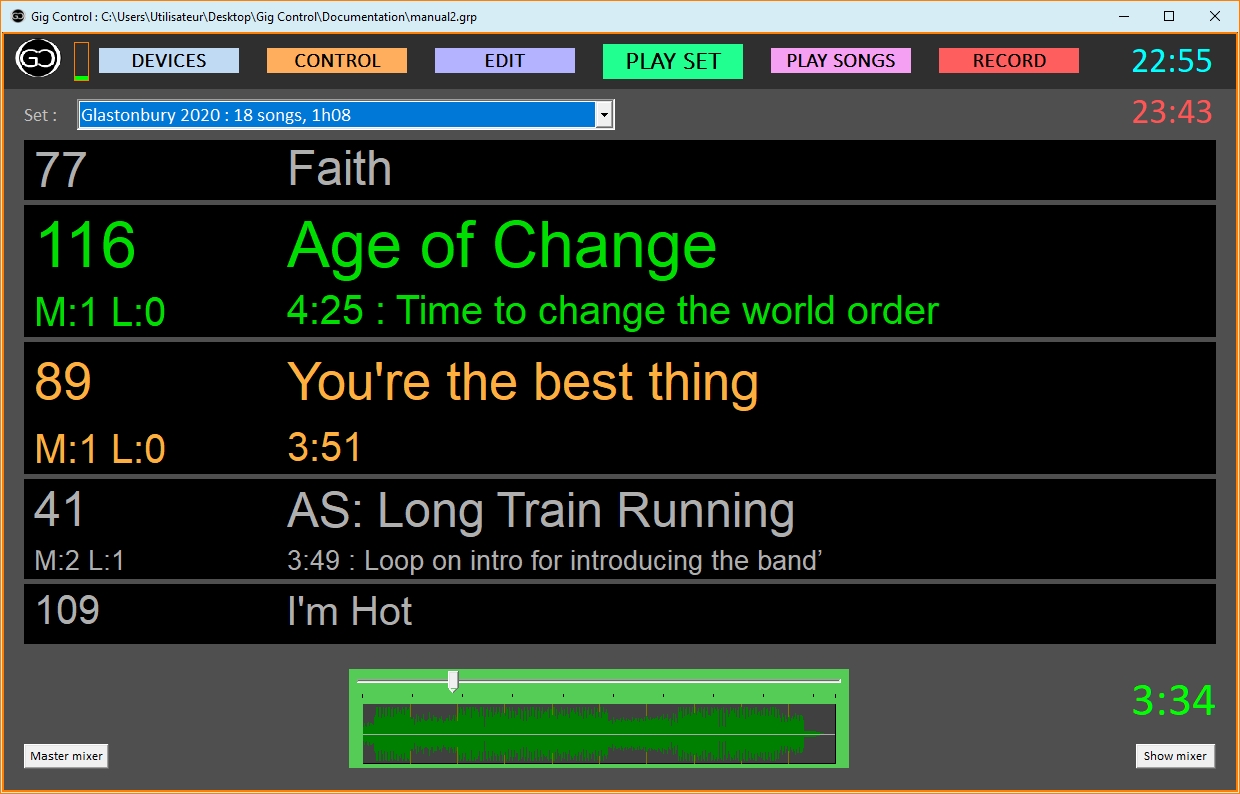 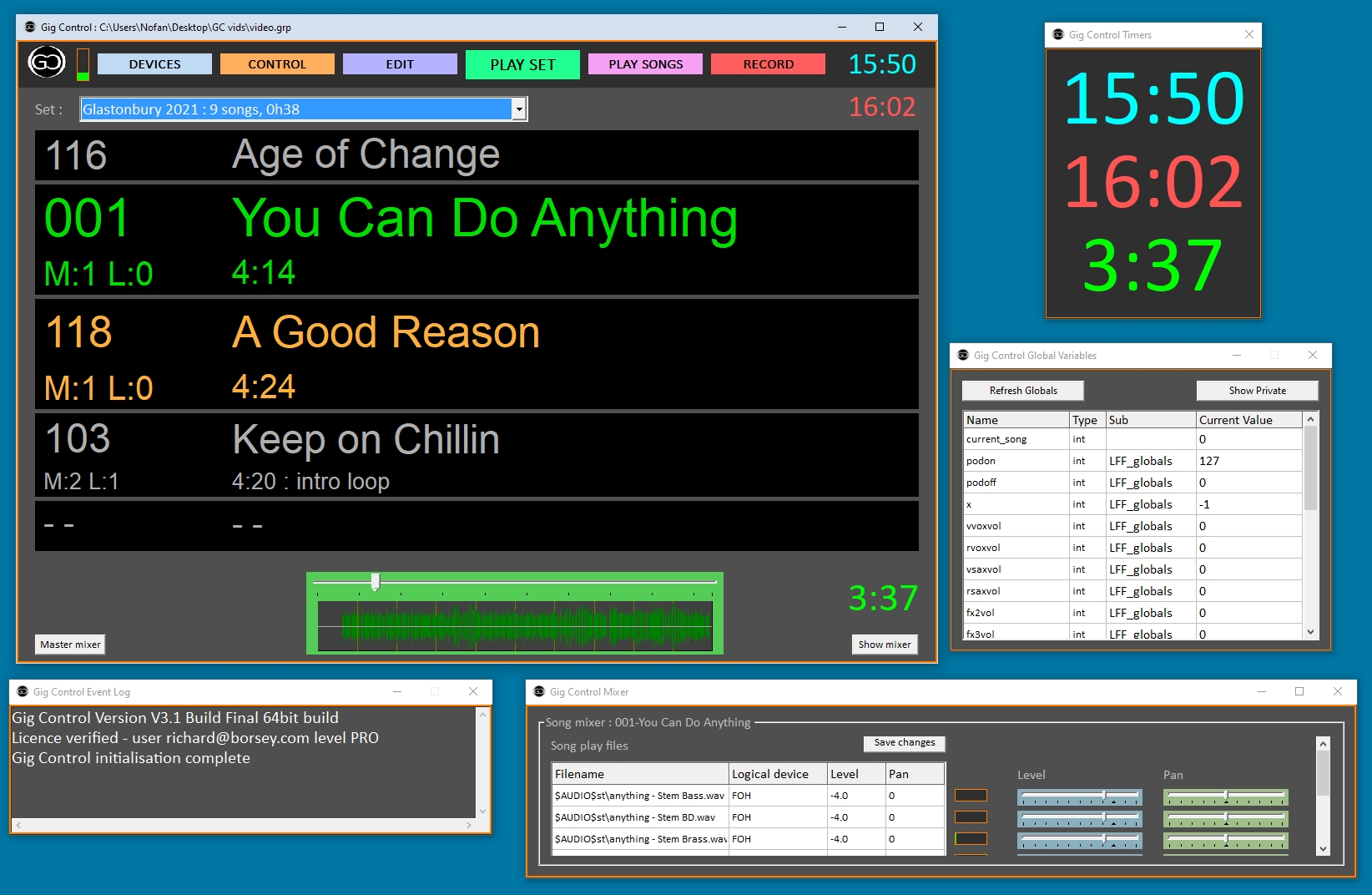 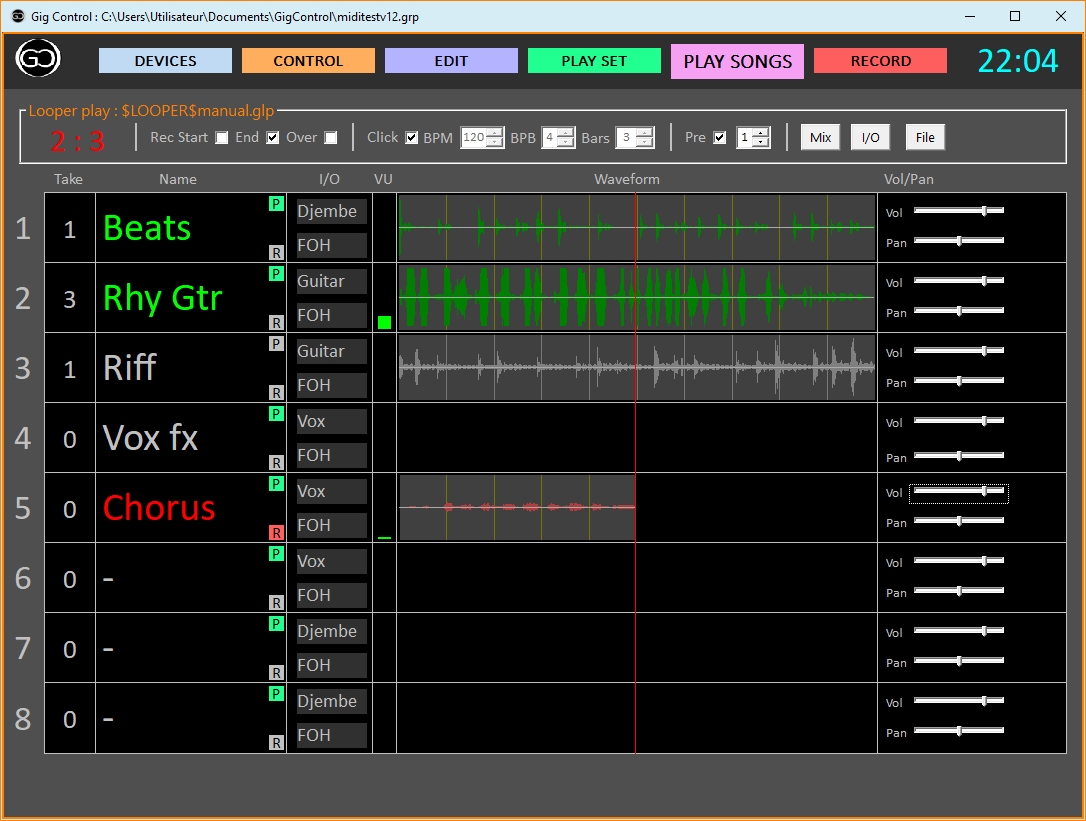 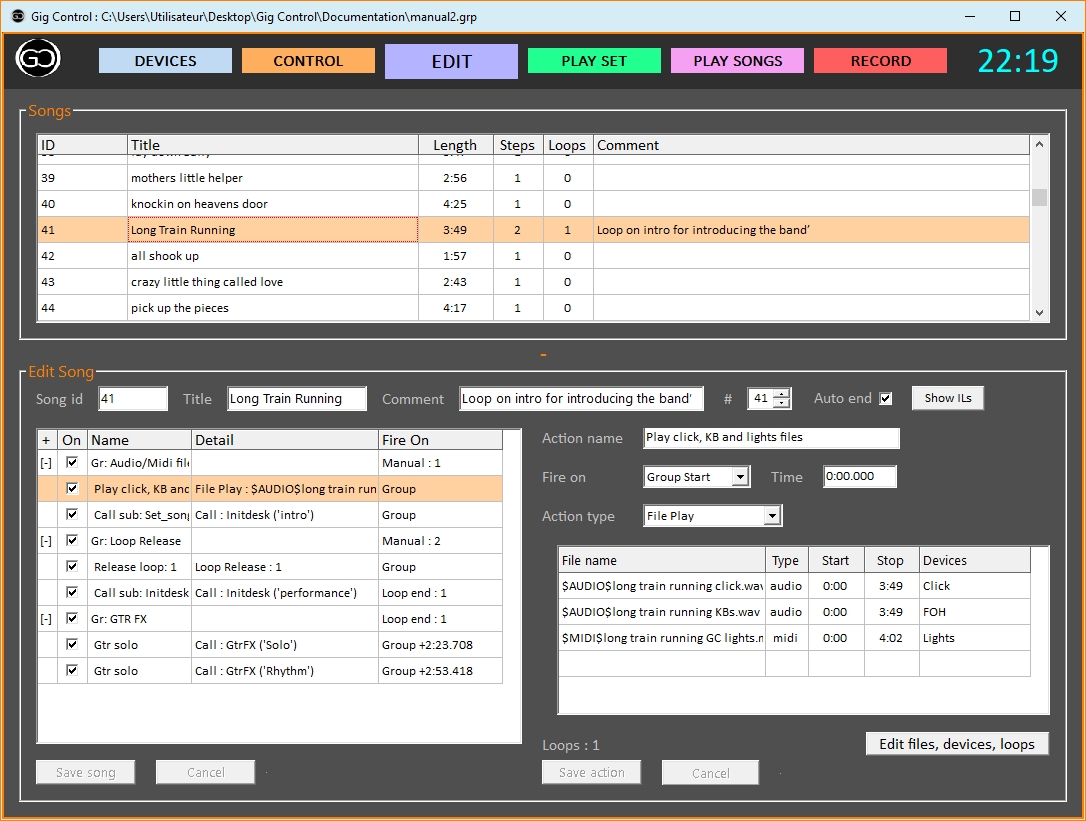 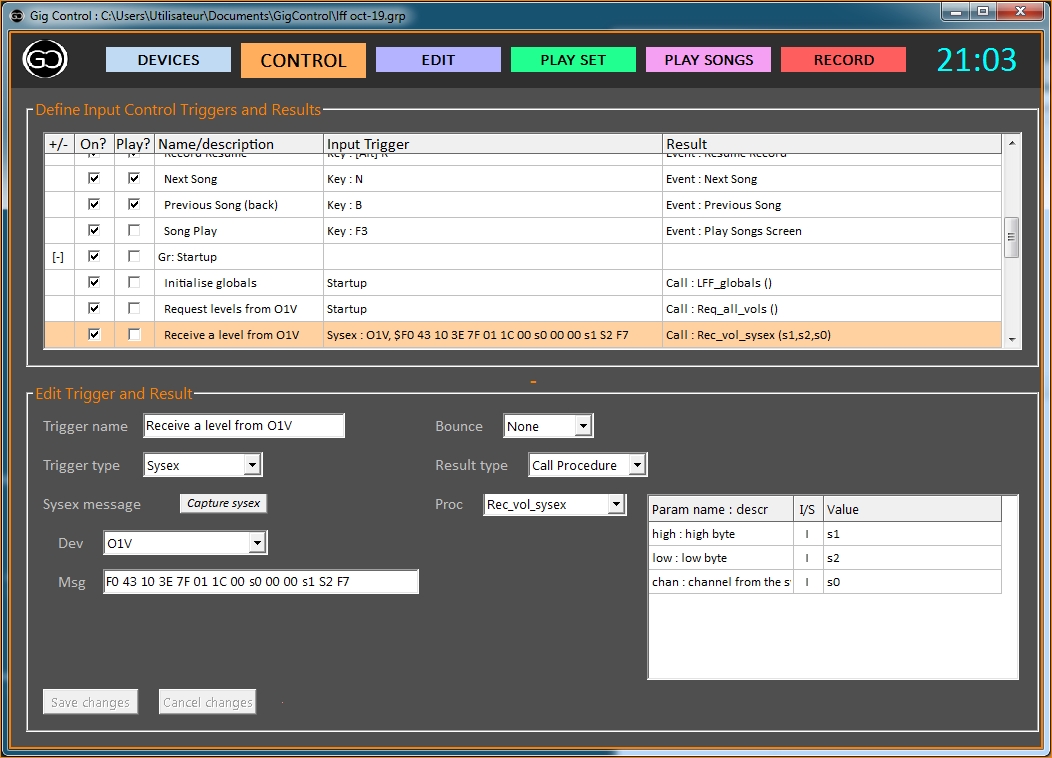 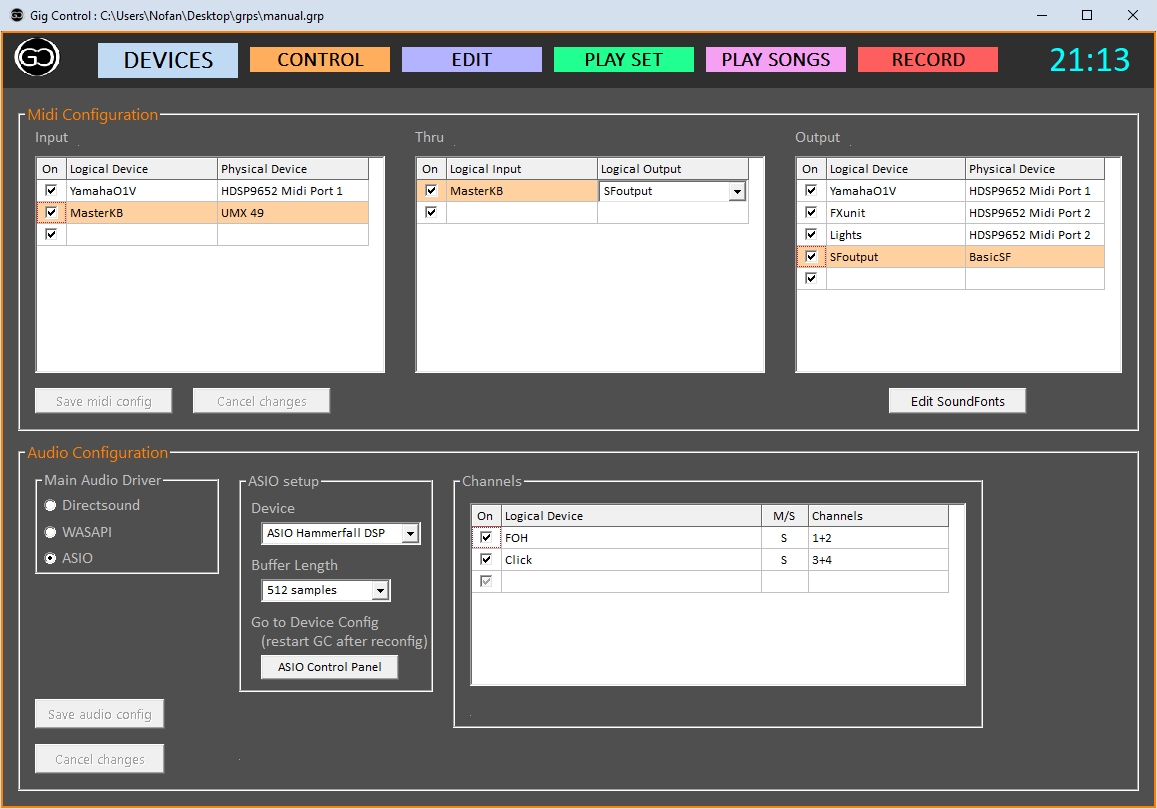 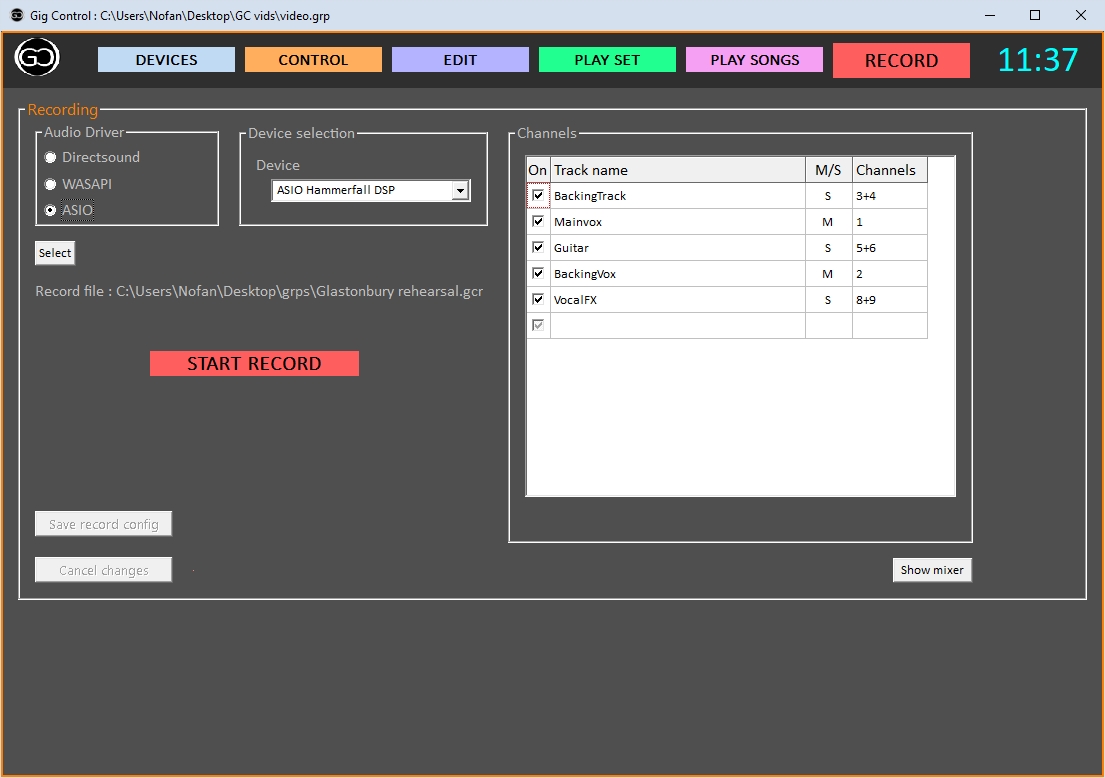 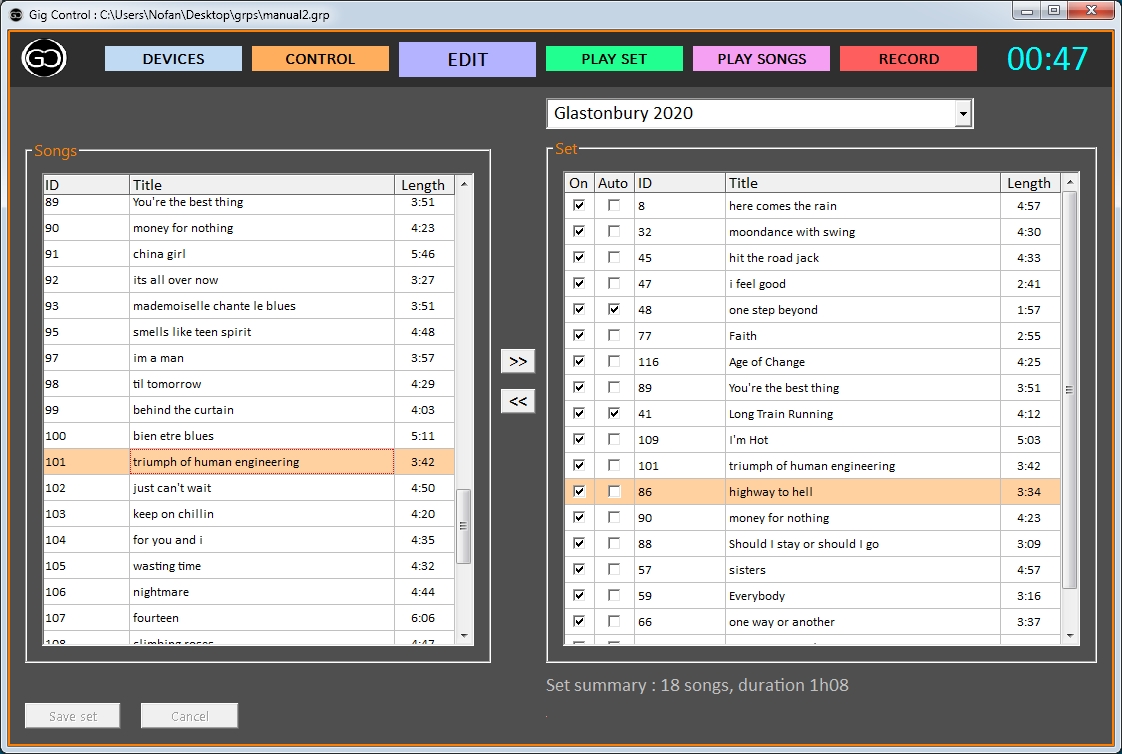 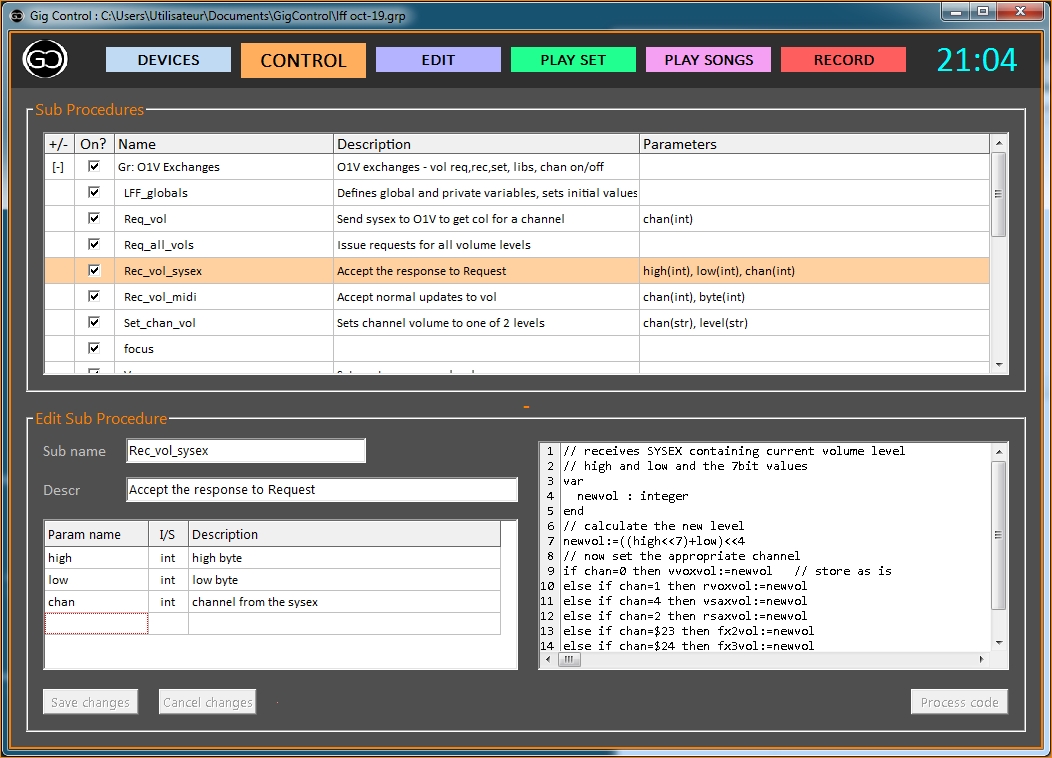 Please contact us if you have any questions or queries.

The trial version of Gig Control is free, and has all features enabled. The sole restriction is that only five Songs can be loaded or saved. See the PURCHASE page for details.